Typical Romanian food everyone should try when in Cluj

When in Cluj, no matter if as a tourist, student or expat, you should know some traditional Romanian delicacies, shouldn’t you? Here’s a list of popular food, drinks and dishes – including some from Transylvania! Try them as long as you’re here!

Slănina afumată is made from the fat found either in the abdominal area or on the back of a pork. In various regions Romania, the bacon is flavored in various ways with either garlic, paprika, black pepper or other spices. Anyway, the most widely used flavoring method, which also acts as a preserver, is the smoking process.

Cabbage rolls are a Romanian specialty made of ground meat (usually pork) mixed with rice and other ingredients and finally rolled into cabbage leaves. They use to be served with polenta (cooked corn meal) or sour cream. Beside Romania, you can find Sarmale in Turkey, Bulgaria, Serbia, Macedonia, Palestine, Jordan, Syria, Lebanon, Greece and the Republic of Moldova. Gourmets say they taste even better when sitting for 2-3 days to gain a special flavor.

Mămăligă (you may know it as Polenta) is a porridge made from boiled corn. Traditionally it is cooked in salty water in a cast iron cauldron. Layers of cheese added to the cooked cornmeal and a sour cream topping make this specialty a delicious entrée or side dish. Often, it is used as a substitute of bread.

Fried dough is an ancient traditional Romanian food. It’s a pastry, eaten as a dessert as well, usually filled with sweet cheese and sprinkled with powdered sugar.

Pork feast is an ancient tradition, involving a dinner right after the pig’s sacrifice to thank all the friends and relatives who helped with the butchering. For the feast, the meat, liver, bacon, ribs and hocks of the pig are fried in its own fat.

Varza la Cluj is quite similar to Sarmale, sometimes even considered as “messed up cabbage rolls”. Still, it tastes different. Originally from Transylvania, the dish has become very popular in other regions as well. The cabbage rolls are filled with rice and pork and then chopped. Varza a la Cluj is served with sour cream.

Gulaș de cartofi cu afumătură is a traditional Transylvanian goulash. Basically, it’s a kind of stew, but it tastes special thanks to the ingredients used. It is usually served with potato noodles, but cream of wheat or flour noodles are also customary side dishes added to it.

This is a bean paste, a traditional culinary delicacy originally from Transylvania that can’t be missing at festive lunches or dinners. Besides, this dish is a fasting period favorite.

Bean soup is one of the main dishes in the Romanian cuisine, even if there are noticeable differences in the way of preparation. In the South of Romania several kinds of vegetables are added. In Moldova it is flavored with dill or tarragon, whilst here in Transylvania it is thickened with flour and then cooked in oil. Sour cream and some vinegar added to it – finished.

This Transylvanian favorite is a soup that contains tarragon, which gives a very special flavor to the soup. Moreover, pork is added to the soup.

Papanash is a typical Romanian “donut dessert” made from sweet cow cheese. It is served with fruit jam, soft cheese (similar to sour cream) and powdered sugar.

Zacuscă is a vegetable spread that is very popular in Romania. The paste is made out of roasted eggplant, sauteed onions, tomato paste and roasted peppers. Some add mushrooms, carrots or celery as well. Zacuscă can be eaten as a relish or spread, typically on bread.

Tuica is a traditional Romanian spirit that contains 28-60% alcohol. Traditionally it is prepared from plums, but you can find some that are produced from other fruits, too.

Where to get all these delicacies? During the Christmas Market in Cluj, that will open December 1st, you can find local producers in Piata Unirii and buy Slanina, Tuica, Zacusca, Romanian cheese and smoked meat. For traditional dishes, visit a Romanian restaurant in Cluj. Highly recommended are Roata or Zama, both close to the city center. To actually feel Romanian traditions, go to Restaurant Valahia where they serve you wearing traditional clothes.

Tell us after, which one is your favorite dish? 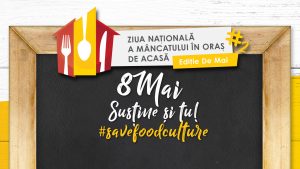