Meadows In The Mountains Festival 2017

Escape into the mystique of the Rhodopes Mountains where the sunrises are as revered as the music.

Meadows In The Mountains is like no other festival in the world. Nestled in the stunning heart of the Rhodope Mountains near Bulgaria’s Greek border, Meadows in the Mountains is set in an otherworldly and jaw-dropping setting that is unmatched anywhere on the planet.

An Unexpected Headliner
The main headliner for Meadows in the Mountains has been the same every year of its seven-year run. Ask anyone who’s ever been to this little festival in Bulgaria’s Rhodopes Mountains and they’ll tell you that the most important act to catch at this festival is the sun rising over the misty mountaintops at dawn.

Getting Into Town
Getting to Meadows in the Mountains is no joke. If you fly into Sofia (the capital), it’s about a four-hour bus ride to Polkovnik Serafimovo. Because this festival is so remote, attendees need to allot a considerable amount of time for transportation to and from the grounds. Sofia International Airport, the main airport in the capital of Bulgaria, is about four and a half hours away from the site, whereas the smaller Plovdiv Airport is about two and a half hours away. For those who leave the fest and are headed directly back to the airport, the organizers suggest doubling the amount of time for the return trip.

Getting There
Once you get to the Polkovnik Serafimovo, there are a few ways to get up the mountain to the actual festival. Most excitingly, locals have established a horse and cart service that will take passengers from village home stays to the fest founds and back, all day every day. In more modern offerings, taxis shuttle fest-goers down the mountain from 10pm until 6am. Or finally, you can hoof it for about 20-30 minutes up the mountain and enjoy a downhill grass bob-sleighing adventure back to town.

Lodging
While some folks prefer to find home stays in the town of Polkovnik Serafimovo, most indulge in the camping experience. Camping at Meadows in the Mountains costs £6.50-10 per person, in order to cover land rental from the villagers. But for those who prefer glamping, the festival offers two, four, and six-person bell tents, loaded with single and double beds, pillows, and near eco-toilets for between £96-112.50 per person. Plus, the higher up the mountain you camp, the better the view.

Costs
While Bulgaria is fairly cheap–the country has yet to convert to the Euro and the local Leva is exchange is usually in Westerners’ favor – prices at the festival can range. Tickets (at least in the early on-sale stages) cost less that £100, but camping can set you back some cash, depending on how you swing it. 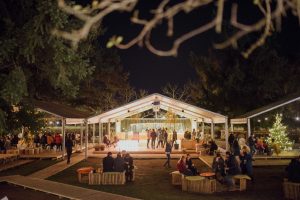