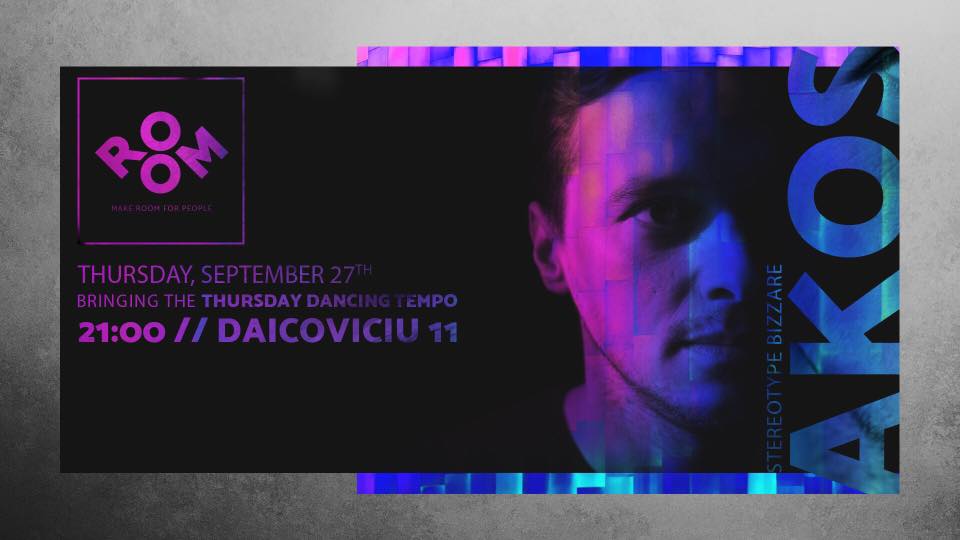 It was a blast last time we did this, so we bring again Thursday Dancing Tempos live in your favourite ROOM.

This time, we #makeROOM for AKOS and his inspiring musical energy.

Disco, house, and techno are the vibrations he sends out to his public with whom he likes to experiment new sounds. He started mixing in 2009 in the UK at FluidBar where he became a rezident.
He currently works as Stage Manager at two major Romanian festivals – Neversea and Untold.
In the last 2 years he took part at events and festivals like Neversea, Untold Festival, Electric Castle, Airfield Festival, Daydreaming Experience, Durusa Summer Hills, Zain Design, Amural Festival, Delahoya, Atelier Cafe, Yolka, Terasa Baraka, Dupa Sky la Wu, Winter Tour Buscat, Control Club, Fluid Bar, Pe Ponton, Booha, Paradise Garage, Midi, Boiler, The Shelter, Les ECuries, Bistritz Sound, Gazette, Tube, Carioca, Chouette.
You can find him as a DJ / producer at Stereotype Bizarre, but also in other musical projects he is currently taking part in.