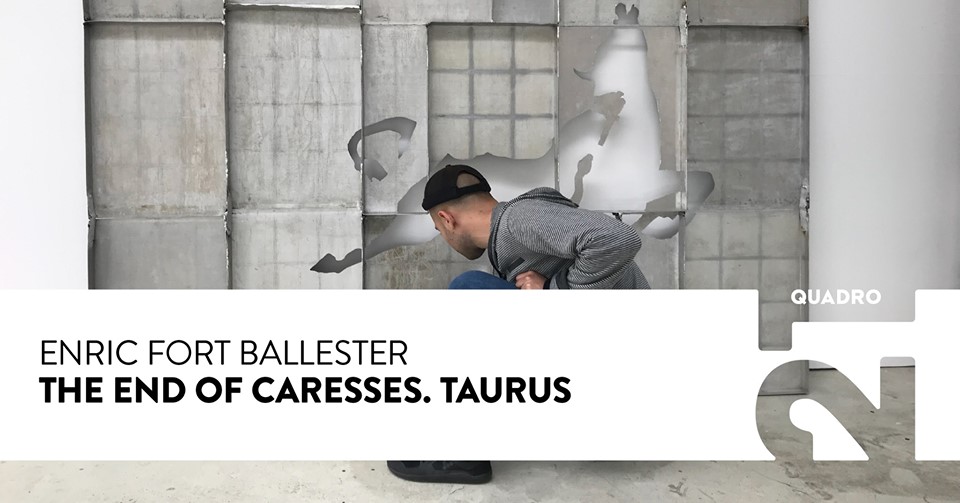 We are pleased to invite you to the Enric Fort Ballester The End of Caresses. Taurus exhibition opening on October 11th, starting 8 pm!

This exhibition presents a chapter from the artist’s overarching project. “The End of Caresses” represents the timeline for his recent works, drawings, performances and sculpture-installations dealing with issues of late capitalism.

The inspirational trigger of the works exhibited is the Biblical story of Pharaoh’s dream as related to Joseph (Genesis 41), according to which Pharaoh “saw seven fat, healthy cows coming up out of the river” and being eaten by “seven thin, bony cows”. In this image Enric recognises the cyclicality of nature and society, the “eternal return” understood as the self-regulating law of a universe with limited resources.

The exhibition is dominated by large-scale aluminium sculpture-installations. The surfaces of the recycled aluminium plates are engraved with well-known mythological scenes that have Taurus as their main actor, yet as a slaughtered victim. From the body of the aluminium plates – a material of the modern age – the image of Taurus has been cut out, with the result that the animal is present in the work only by his absence.

The exhibition at Quadro 21 Gallery, this “chapter” of “The End of Caresses”, would appear to coincide with a period in which the artist is rehearsing the stories and fantasies people have expressed down through the ages through the image of Taurus. He is neither illustrating nor making a collage of narratives. Rather, he is making a collection of mythological images, a scenographic landscape for his lengthy processes, in which he includes the human heritage as an opensource storeroom, while leaving all the meanings active.
What is beyond doubt is that from this landscape, from these engraved plates, the Bull is missing at this present moment. Maybe he has become so thin and bony that he is now invisible – but he may soon reappear…

About the artist:
Enric Fort Ballester, born in 1987 in Benifairó de les Valls, Spain, studied arts at Facultat de Belles Arts Sant Carles in Valencia and Hochschule für Bildende Künste in Braunschweig, under the guidance of professors Candice Breitz and Ciprian Mureșan. He later completed his master’s degree within the same institution. His most recent solo exhibitions (2017) where held at Kunstverein Wolfenbüttel and JosédelaFuente Gallery, Santander. Enric has participated in numerous international group exhibitions (Cluj, Bogotá, Berlin, The Hague, Valencia). He lives in Hanover, where he is a founding member of Niki Residence. His art practice is mainly based on performance involving drawing, sculpture, video and installation.

The event is part of Noaptea Albă a Galeriilor Cluj-Napoca.