At times The Neon Demon plays like an exposé of this cruel fashion cattle market, with models stripped to humiliating (rather than titillating) underwear, forced to endure the walk of shame under unforgiving gazes.

For all its shimmery surface modernity, this story about the commodified consumption of youth is as old as the hills, a carefully choreographed carnival of voyeurism in which corruptible beauty is “the only thing” and every look comes with daggers.

Motel rooms are stalked by beasts both real and metaphorical (Keanu Reeves giving good creep) and photographers are indistinguishable from serial killers (shades of Eyes of Laura Mars). But while Jesse may faint like Sleeping Beauty, with rose petals falling around her goldie locks, it’s her own image that grabs her by the throat. Mirrors are everywhere, to be stared into, scrawled upon, kissed and smashed. And the more Jesse looks, the more she sees nothing but herself…

Angel Rusu aka Blanilla has been DJ-ing and producing breakbeat, drum&bass and other related genres for about a decade. Originating from Transylvania- Romania, Blanilla managed to take part at all the important festivals in his area (Electric Castle, TM Base, 48h, Summer Break), thanks to his energetic, dynamic and well built Dj sets. He was three times finalist at Heineken Music Thirst Studio, the most important Djs and producers competition in Romania.

During the years, Blanilla had the chance of sharing the stage with Stanton Warriors, Groove Armada, General Midi, Aquasky, Jay Cunning, Mesmer, James Lavelle, 2 many Djs, Sven Vath and of course, Tiesto. In november 2011, he released an album with MC Posset for their common project, Setilla.

Currently, Blanilla lives in Cluj-Napoca working as a radio Dj and producing track after track in his home studio, being the newest member of the swedish pioneer breakbeat label, Sound Of Habib. He also collaborates with the greek label, V.I.M. Records, the iconic British label- Distinctive and Kindcrime Rec.

Colectiva Silver Screen proposes a series of feature and documentary film screenings with dystopian, anarchist, activist, trangressive and other various underground culture related themes, ranging from the culture’s onset until the present day. The cinematheque will take place every Wednesday at 21:00 at Colectiva Gazette on Calea Turzii. You’re welcome ! 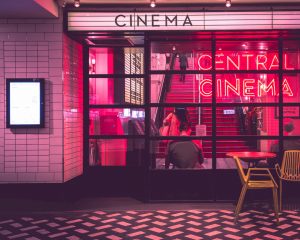